Is Housing First the silver bullet to end homelessness?

Wheatley Group Chief Executive Martin Armstrong asks if Housing First is the silver bullet we are looking for to end homelessness.

In Scotland last year, nearly 34,000 people in Scotland presented as homeless and nearly 11,000 families were living in temporary accommodation.

In our biggest city, Glasgow, there are thought to be between 300 and 400 people living on the streets every day.

Homelessness – whether “hidden” or in the guise of rough sleeping is a social problem with a devastating human – and financial - cost.

We all want to end homelessness – but how?

One solution that has made waves recently is the Housing First approach.

The model takes people from the streets and moves them into permanent, settled accommodation. It then adds a package of tailored support to address the issues that drove that person to crisis in the first place.

Originating in New York, it was a radical departure from the “laddered” alternative, which asked people to start to solve their non-housing problems – such as addiction – and become “tenancy ready” before finding a permanent home.

A recent evaluation of a programme in Liverpool found the approach had transformed the lives of individuals and saved millions to the public purse.

And my own experience of Housing First suggests it has much to recommend it as a policy.

Glasgow Housing Association, the biggest social landlord in Wheatley Group, has been involved in a small scale pilot of the programme for the past seven years.

Seven of our tenancies were given over to homeless charity Turning Point Scotland, who used the properties to provide a home and 24-hour holistic support to people with a history of offending and drug and alcohol addiction.

More than 90% of people on the programme who had really struggled in the past stuck with their tenancies for three years or more and were able to use a safe, secure home as a springboard to transform their lives. These people had been among the most disadvantaged and excluded.

We believe that the personal, tailored support given to homeless customers by people they have built a trusting relationship with is what lies behind the success of the Housing First model.

At Wheatley we are using that approach to do more to help people who, unlike those in the Turning Point pilot, have not reached crisis point.

Two programmes we offer show us the value of providing tailored support at an earlier stage to prevent homelessness.

My Great Start, launched last year and, supported by our charitable trust Wheatley Foundation, offers customers one-to-one support right from day one of their tenancy. It includes budgeting advice, support with debt, help with setting up a bank account, or help with furnishing a home.

It is available to all tenants – not just those who used to be on the streets, and takes into account what they need to help them make a go of their tenancy.

One new customer came to us with her teenage daughter after she was left homeless and almost destitute after fleeing domestic abuse.  My Great Start meant she got the help she needed to claim benefits she was entitled to, advice on cutting her fuel bills, and a referral to our home furnishings service so she could make her house a home. It meant she got back on her feet and could focus on rebuilding her life.

Our Tenancy Support Service, a ground-breaking partnership between housing and care staff, provides early housing support when customers are struggling to cope.

It also opens the door to more specialised intervention, if the customer has mental health problems, issues with drugs and alcohol, physical disabilities, learning disabilities or dementia.

One customer was referred after she fell badly into rent arrears and had stopped contact with her housing officer.  We found she was caring on her own for her son who had brittle bone disease and simply couldn’t cope any longer.  A welfare benefits advisor helped her access money she didn’t know she could claim and she was also awarded a discretionary housing payment to tackle her arrears.  A new wheelchair and personal care package meant her son was able to get out and about for the first time in years. Mother and son are now confident, empowered and able to cope with the everyday issues that were causing her problems. And crucially, they are still in their home.

Taking our most vulnerable customers by the hand and giving them the help they need with their individual issues is working. Tenancy sustainment for previously homeless customers across Wheatley Group is now at 92%.

Addressing individual needs is, of course, only part of the picture, and we are also taking action to address the structural issues around homelessness – from combating poverty with jobs and training opportunities, to addressing the housing supply with our ambitious new-build programme.

This joined up approach means we can play our part not just in in preventing homelessness but in offering people real hope for a better future.

This blog first appeared in Inside Housing 16 August 2017. 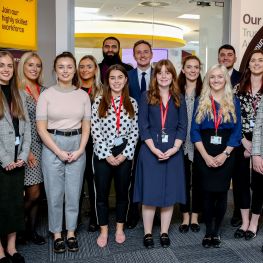 Wheatley launches graduate search for leaders of the future

Wheatley Group is on the lookout for 12 of Scotland’s brightest and best university leavers to join its graduate training programme.