Wheatley Group has handed over its 100th home to Scotland’s Housing First partnership to tackle homelessness and rough sleeping in Scotland. 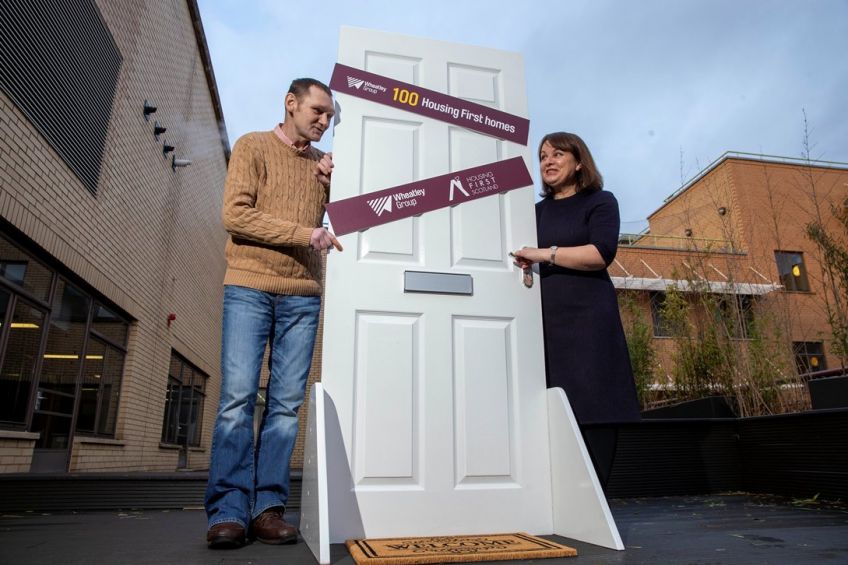 Housing First Scotland is a partnership set up to tackle rough sleeping. It gives secure mainstream tenancies to people who are currently sleeping rough or living in hostels and other temporary accommodation and is aimed at people with complex needs such as mental health or addiction issues.

The model helps people into permanent accommodation as quickly as possible, providing them with the support they need to sustain their tenancy and rebuild their lives.

Wheatley pledged up to 200 homes to the partnership in December 2018, following the Sleep in the Park fundraiser organised by Social Bite. Wheatley also gives all new Housing First tenants a starter pack that can include food, recycled furniture and fire-retardant bedding.

Wheatley tenants can also get advice and assistance on everything from saving money on energy bills and help to set up gas, electricity and bank accounts, to arranging a home fire safety visit.

One of the people who has been housed through Housing First is William Smith, who is now a GHA tenant in Glasgow.

He moved into his home at Christmas, and has already secured a training opportunity with Wheatley Group through the Wheatley Foundation’s Changing Lives Environmental Training Scheme, and is on a programme to overcome his drug addiction.

He said: “Since moving in here I have come on leaps and bounds. It feels a lot better to have a home.

“My housing officer, Tiffany, is there for me. I was given the things I needed when I moved in. If I need anything sorted, I just get in touch with her and she comes to see me.

“Having my own home and my own front door is a good feeling. I feel safe. I feel a lot of hope for the future. It is slow but I am on the right track.”

The Housing First Pathfinder programme in Scotland, which is running in Aberdeenshire, Dundee, Edinburgh, Glasgow and Stirling, is supported by the Scottish Government and Social Bite’s Housing First Scotland fund, which is administered by the Corra Foundation.

In Glasgow, Wheatley is working with partners including Glasgow's Health & Social Care Partnership, the Salvation Army and Social Bite and the Glasgow Housing First Consortium.

The Merchants House of Glasgow committed £200,000 to fund employability projects for Housing First tenants in Glasgow.

The Lord Dean of Guild, Alasdair Ronald said: “The level of homelessness and rough sleeping, which is there for us all to see on the city’s streets every day, is a personal tragedy for those who are homeless and a source of shame for us all.

“We are pleased to see Wheatley Group have made significant progress and look forward to continuing to support, and work with them on, this crucially important project."

Wheatley Group Chief Executive Martin Armstrong said: “Wheatley is proud to hand over its 100th home to the Housing First partnership. This is a really important milestone in our joint efforts to end homelessness in Scotland.

“I am always really moved when I hear and see the difference that a warm, safe and secure home – along with right support – can make as people rebuild their lives and I am really proud of the role Wheatley has played so far.”

Social Bite founder Josh Littlejohn said: ‘This is a brilliant milestone for Wheatley and the Housing First Pathfinder programme.

“Wheatley Group were the first organisation to pledge properties when we began this Housing First programme, so I’m delighted to see their progress.

“I’m amazed and humbled to see the difference it has made to people like William. Thank you to all the partners who are working together on our eventual goal of eradicating homelessness in Scotland."

Councillor Mhairi Hunter, Glasgow’s Convener for Health & Social Care, said: “Glasgow is proud to be part of the national development of Housing First in Scotland and to work closely in partnership with Wheatley Group and other registered social landlords in the city to provide secure mainstream tenancies for vulnerable people with complex needs.

“Ninety-two percent of the 102 Housing First tenancies delivered in Glasgow so far have been sustained and that is a fantastic achievement attributable to the intensive, wraparound support given to people by a range of partner organisations.

"Housing First is transforming lives and it is wonderful to hear the success stories – including that of William, whom I’d like to congratulate on his new home and job.” 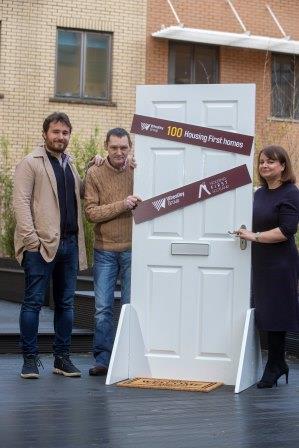